It’s been a little while, but I’m back because the birds are.

In my neighborhood the mourning doves are in the branches of street trees, softly moaning and ooh-OOOOH-ing. Blue jays gurgle and jeer, and the grackles readle-eak, chitip and chaw. (I’ve heard grackles’ calls described as “nails on the chalkboard of hell.” That may be, but they make up for the screechings with their exceptional intelligence and lovely, iridescent plumage.) Meanwhile, the song of the cardinal, as robust and bright as paint, saturates the morning. There is also my favorite, the robin. I sit and listen to one outside the window as he hollers his cheerily, cheer up, cheer up, cheerily, cheer up. I luxuriate, I sink in. Winter, even the barely half a winter that hesitatingly lingered over us for a few months, becomes more of a strange and sketchy memory every day.

The city’s pinioned residents are in one sense back, coloring in the morning with beauty and song, but they were never really gone. The doves, shaped as beautifully as 18th century cursive, the robins and jays – each one of these birds was here for the whole haul of winter. So, how is it that we’re only just beginning to hear them now?

The answer, it turns out, lies in the pituitary gland. In humans, that pea-sized gland moderates the thyroid and converts food into energy, along with a litany of other essential tasks. The bird’s pituitary gland is just as fundamental to its survival and, in the greater scheme of things, also makes a spring morning what it is.

As days lengthen and allow for more sunlight to penetrate the earth, prodding crocuses out of hiding and gracing the landscape with purples and fecundity, the light hits cells in birds’ brains which flicker certain genes to attention. These genes coddle the thyroid into activity with hormones, which knock down yet another domino by stimulating the tiny pituitary. In turn, this gland produces more hormones called gonadotrophins which, as one may guess, have a little something to do with the testes. Specifically, they prompt them to grow. This growth forces males to remember why the phrase is not just “and the bees,” and they suddenly start singing earnestly and fervently, whistling away the hours with a lusty abandon.

In the non-migrating bird’s winter, time is spent searching for food, conserving energy, and surviving. During that time these birds, with the exception of anomalies such as song sparrows and chickadees, simply lack the physiological drive to do something as superfluous as singing. In the spring, however, they devote a large part of their waking hours to performing and courting, all in a lead-up to the annual traditions of the laying of eggs and tending of young. While January and February can be incredibly trying with their cold temperatures, monochromatic atmospheres, and the stolid absence of song, it all becomes worthwhile when the birds remember how to make their melodies, and we are once again allowed to experience the sweetness and hardworking musicalities of their small and skilled throats. 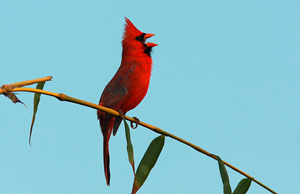 What birds are you hearing? Have they been around all winter, or are they just beginning to return?

What do you think? Cancel reply